The creaking door, missing papers, an unusual scent hanging in the air…Mystery is all

around us every day of our lives. It could be the phone call you answered to find no one there. The new cat hanging out in your back yard. Or something that’s gone missing at work. Mystery is what keeps life interesting and always testing our brain.

Life would be boring without mystery.

Growing up I was an avid reader and my favorite books were those that had a bit of mystery to them. In junior high I devoured the Nancy Drew and Hardy Boys series. Even the Walter Farley books I read had mystery to them even though I initially picked up the books for the horses.

When I first started writing historical westerns I couldn’t keep the mystery out of the stories. It was building the mystery in the story rather than the romance that made the plotting interesting to me. I recently had a conversation with the editor who published my first westerns. When I told her I was writing mysteries and loving it, she said, “I always thought your voice leaned toward mysteries.”  That kind of validated my decision to write mysteries.

My other interest is Native American cultures, specifically, the Nez Perce. I grew up in Wallowa County, the area where the Chief Joseph band or Lake Nimiipuu as they call themselves, summered and wintered. Of course this was way before I lived in Wallowa County, but they were always on my mind growing up. I found it unfortunate that the only time the Nez Perce were allowed in the county was during Chief Joeseph Days a rodeo weekend where the locals benefited from the history of the county yet the people who lived there before them it was the only weekend they were allowed to return.

A lot has changed in the thirty years since I moved away. The Nez Perce have purchased land in the county. They have a yearly powwow, Tamkaliks, the weekend before Chief Joseph Days, and they have put up interpretive centers as well as are now monitoring the salmon runs in the county. I’m happy they are having voices into how the county is moving forward.

The first book, Double Duplicity, starts with Shandra returning from her grandmother’s funeral. Shandra finds a murdered art gallery owner after seeing her best friend, also an art gallery owner, hurrying across the street. When Shandra is dropped as a suspect, she begins digging to find the real killer before her friend becomes the scapegoat. Her grandmother comes to her in dreams, directing her to clues that help Shandra and a detective find the real murderer. 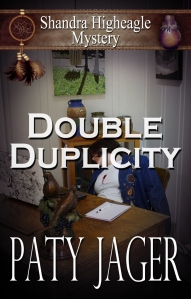 Book one of the Shandra Higheagle Native American Mystery Series

On the eve of the biggest art event at Huckleberry Mountain Resort, potter Shandra Higheagle finds herself in the middle of a murder investigation. She’s ruled out as a suspect, but now it’s up to her to prove the friend she witnessed fleeing the scene was just as innocent. With help from her recently deceased Nez Perce grandmother, Shandra becomes more confused than ever but just as determined to discover the truth.

Detective Ryan Greer prides himself on solving crimes and refuses to ignore a single clue, including Shandra Higheagle’s visions. While Shandra is hesitant to trust her dreams, Ryan believes in them and believes in her.

Can the pair uncover enough clues for Ryan to make an arrest before one of them becomes the next victim?

Writing into the Sunset