This past weekend I attended the InD’Scribe Conference and RONE awards.  My book Double Duplicity was a finalist in the mystery category. 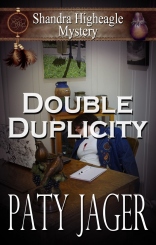 I hadn’t planned on attending the conference, but I received an email that said my book was a finalist in the RONE contest. A contest that was vetted three ways. First the book had to have a 4.5 or better review from the InD’Tale review magazine. Then it was left to readers to vote for it. After that round it was read by people who work in the publishing industry. The scores were tabulated and the winners were picked.

At the conference, I was also a member of a 4 person panel that talked about writing paranormal. I was happy to find I wasn’t the only person who had shape-shifting Native American tales. My book, Double Duplicity, that was up for the Mystery RONE award has a deceased Nez Perce woman who visits her granddaughter’s dreams and helps her solve mysteries. I believe being a finalist helped put me on that particular panel.

The mystery category had stiff competition. I didn’t read each finalists books but I looked them up. A funny thing happened when I first arrived. A young man saw my finalist badge and asked what category. I told him mystery. He was a finalist for paranormal.  He asked if I’d read my competition. I replied I hadn’t. “That was probably smart,” he said. “After reading mine, I know I don’t have a chance.” Which was pretty much why I didn’t want to read the competition.  It would have taken the wistfulness of perhaps winning away, if I felt I didn’t have a chance.

I dressed up for the event and sat through the two hour long celebration. Of course mystery and suspense were the last categories to be given out.

I’m the first to admit when I saw they were making the people who won the top spot give a speech, I was hoping to not be the winner, only a runner up so I didn’t have to give a speech. And my wish came true. They called the winner of the mystery category and then the runner up. Which was me! While winning and having the crystal trophy would have been awesome because the InDTale magazine would have also given my book free promotion, I’m happy with the certificate naming me the runner up. It validated I didn’t make the wrong decision by writing the genre of my heart.

And even though I’m a runner up, TJ Mackay, the head of InDTale magazine, said that many of the categories the difference between the winner and 1st runner up was by 1 point and one category by half a point. I like to think the mystery category was one of the close ones and that makes my runner up all the more sweet.

You can download the first book of the Shandra Higheagle Mystery Series, Double Duplicity, for free at all ebook venues. Watch in November for the 7th book in the series, Yuletide Slayings.

Paty Jager is an award-winning author of 25+ novels and over a dozen novellas and short stories of murder mystery, western historical romance, and action adventure. She has a RomCon Reader’s Choice Award for her Action Adventure and received the EPPIE Award for Best Contemporary Romance. Her first mystery was a finalist in the Chanticleer Mayhem and Mystery Award and was 1st runner up in the RONE Award Mystery category.  This is what Mysteries Etc says about her Shandra Higheagle mystery series: “Mystery, romance, small town, and Native American heritage combine to make a compelling read.”