I had the great pleasure this past weekend to attend a meeting of my local chapter of the Sisters in Crime (the Delaware Valley Chapter). The guest speaker for the meeting is a Conservator at the University of Pennsylvania Museum of Archaeology and Anthropology (which is, coincidentally, where I earned my PhD in Anthropology). Because it is a museum of archaeology rather than fine arts, Molly Gleeson conserves artifacts and other specimens. That includes human remains.

It was a fascinating talk — as they always are at these meetings. Ms. Gleeson prefaced her talk by warning us that she was going to show us images of human remains, then admitted that for this particular audience that might not be a problem. We all write and read about murder. We’re used to human remains, right?

Well…maybe. A murder mystery can be many, many things. It can be light hearted and funny. It can be chic lit. It can be dark, gritty. And it can be gory, a story of violence and evil. When choosing a new book to read, a mystery reader has to know what she’s getting into — or she reads at her own peril.

Personally, I prefer not to read gruesome stories. I particularly avoid books that include rape scenes, but I generally skim through (or avoid altogether) stories with too much gory detail, too much vividly painted violence. I write the books I like to read. Relatively dark mysteries, gritty even, but with the violence taking place almost entirely off the page.

As an aside, one of the most beautiful death scenes I’ve ever read was written by the late, great Ruth Rendell (who, incidentally, did not shy away from violence when she felt it was called for). I always picture that pretty corpse floating peacefully and elegantly down the river, surrounded by wildflowers, whenever I’m trying to write my own murder scenes. I have not yet achieved Rendell’s level of artistic description of death, but I’ll keep trying. 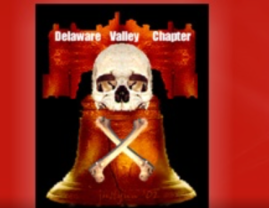 Which brings me back to the Delaware Valley Chapter of the Sisters in Crime. Each month, a technical speaker is invited to come to our group, to share his or her knowledge of biology, ways to kill a person, how crime scenes are handled, even about ancient methods of human preservation (mummies). To an outsider, we probably seem like a pretty gory bunch.

Quite the contrary. In our group, you’ll find cozy writers, young adult writers, and many, like me, who write traditional mysteries that are high on mystery but low on sex and violence. But one thing we have in common: we’re all well-informed on those gory topics that inform the background of our stories, but don’t make an appearance on the page.

How about you? How much violence do you want to see in the mysteries you read?

8 thoughts on “Murder Without Violence”