The way my mind, and I would expect most writer’s minds work, if I see a person with something interesting about them, chances are they are going to end up in one of my books.

I like to make my main and secondary characters stand out. Whether it’s their background, their mannerisms, or just the way they look. Study the people around you. No one is exactly like another. Yes, they may have the same color of hair or wear glasses. But if you look close, one may have designer glasses while another has the cheapest brand. And one may have smooth, shiny hair while another has hair that could use some conditioner or even be washed.  Both the glasses and the hair tell you a lot about that character without me saying too much.

That is what I like to do when writing. Give the readers just enough information about a character to then let their imaginations fill in the blanks.

I think if you over describe a character, you are not allowing the reader to fully use their imaginations in “seeing” your story.

It’s like the scene were six people witness a crime and each one sees something different. I think all readers are the same way. Even if I did give them an exact description of a character, they would still “see” the character in their own way in their mind.

And I like to flip things around. If I see a well-dressed man with a bald head and carrying a brief case that’s normal. But I see he is wearing sneakers- that’s different. I figure out why he is wearing sneakers in my mind, then in my story, it’s a woman in her sixties, in a jacket and skirt, with sneakers and gray hair. She is wearing sneakers because she is finished with her appointments for the day and she is getting ready to walk home.  Maybe…

Now the man may just wear sneakers all the time because he is a CEO of a sporting goods firm, but I gave the spin on the woman and why she is wearing shoes to show some insight into her. She is a person concerned for her health, so she walks. And is wise enough to bring sneakers and confident in herself to be able to wear sneakers with business clothing.

Or- is she grudgingly walking because of her health. Perhaps her doctor told her she had to get more exercise and rather than “waste” time, she found she could walk to and from work faster than driving and that way, she gets her exercise and a few more minutes of work time?  There are so many ways to spin one character and so many ways to falsely show they may be the killer.

I would have to say my favorite part of writing murder mystery books is finding ways to throw the reader off and point a finger or evidence toward an innocent person. Does that make me cruel? Perhaps! But it is what makes writing and reading mystery books so much fun!

Go ahead, pick out a person and study them. How can you use something about them to create a character? 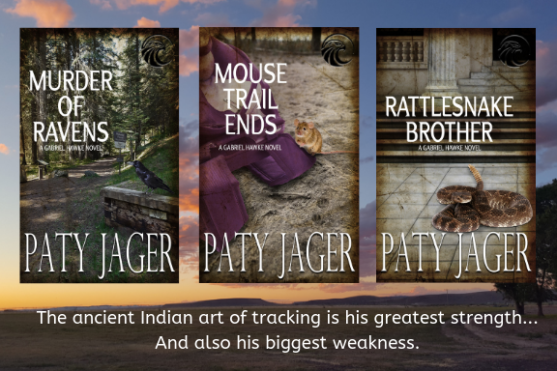 Arresting his brother-in-law ended his marriage, could solving this murder ruin a friendship? https://www.books2read.com/u/bxZwMP

Dead bodies in the wilderness. A child is missing. Hawke is an expert tracker, but he isn’t the only one looking for the child. https://books2read.com/u/mlYaWB

2 thoughts on “Not Your Usual Suspect by Paty Jager”