I was visiting with my brother this weekend and he told me I had to come visit him. He had discovered some great ways to murder someone at the new fish hatchery where he works.

Not that we think a lot a like or anything… 🙂 This is the same brother who cave me the inspiration that started my Shandra Higheagle Series. As a bronze sculptor, he had details about how some statues were put together that gave him an idea on how to conceal a murder weapon which he passed on to his lovely big sister who likes to write stories about killing  people. L 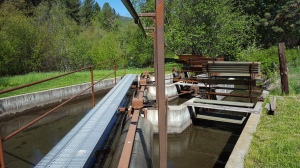 How he works at an Indian fish hatchery which I can make fit into my new Gabriel Hawke series. You can bed as soon as things slow down around here with harvesting and company, we’ll take a trip to see all the great ways he’s found to hide a body or shorten a life. I know that sounds gruesome, but when you are constantly trying to find new and plausible ways to commit a murder that will stump your main character and your readers, you have to dig into every possibility.

For me a good murder mystery read is one where I’m interested in the method of murder as well as why it happened and by whom.

My first Gabriel Hawke book releasing in January has a unique twist to how the murdered victim is found.

Here is the blurb to Murder of Ravens to pique your interest.

The ancient Indian art of tracking is his greatest strength…

And also his biggest weakness.

Oregon Dept. of Fish and Wildlife  State Trooper Gabriel Hawke believes he’s chasing poachers. However, he comes upon a wildlife biologist standing over a body that is wearing a wolf tracking collar.

He uses master tracker skills taught to him by his Nez Perce grandfather to follow clues on the mountain. Paper trails and the whisper of rumors in the rural community where he works, draws Hawke to a conclusion that he finds bitter.

Arresting his brother-in-law ended his marriage, could solving this murder ruin a friendship?