When I started brainstorming the newest Shandra Higheagle Mystery, I didn’t think about what was in the headlines. I don’t even watch the news. It’s too depressing.

Every time I start brainstorming a book, I think about the world around me or my life. It is easier to write about something you have a vested interest in. I’d already determined that Shandra would volunteer at  Warner High School. That had been mentioned more as an excuse for her to ferret out information in the previous book, but it was an option for the next book. I took it and ran.

She’s at a high school. Who could I murder and why? I traveled back to my high school days. There had been favorite teachers and not so favorite teachers, but the one that stuck out in my mind the most was the one who gave me the creeps. I didn’t like his smile, he dressed too fancy for the area where we lived, and everyone knew, that if a girl sat in the front row wearing a dress, they received a A for the day and enough of those would get you an A for the class. I didn’t hear any more rumors about him than that, but as I stated before, he kind of gave me the creeps, and I had two classes with him.

I took that feeling and information and came up with a much more lecherous teacher in my fictional school. I gave him a mental disorder that made him a pervert. He was short of stature and preyed on the women his size of smaller. Teachers and students alike. Then I gave the principal a misguided reason for not following through on the harassment charges.

And I had a murder victim.

Adding an autistic boy, who’s older brother looked out for him, and cyber bulling, I found a story full of possible suspects and lots of hidden secrets.

When I finished the book, I saw it as a misleading mystery.  My reviewers wrote in their reviews, “ripped from the headlines.” So I’m guessing my latest book is not only a mystery, but it has subjects that are being talked about in the news. Which is good for my story and promotion, but I hadn’t planned it that way. It was a story born of my past experience and adding in the culture of today.

Do you like stories that incorporate what is happening in the news?

An autistic boy and his brother need potter Shandra Higheagle’s help when a teacher’s body is found after a confrontation with the older brother. Shandra knows the boy is innocent. Digging into the teacher’s life, she and Ryan turn up scandal.

Detective Ryan Greer has believed in Shandra’s dreams in the past, but she can’t always be right. When his investigation uncovers a principal on the take, females being harassed, and parents kept in the dark, he discovers more suspects than the brothers. Shandra’s time at the school is coming to an end, and the killer has struck again. 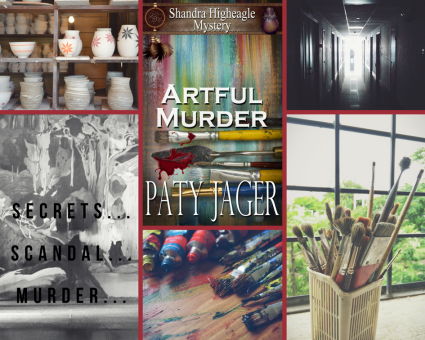 One thought on “Murder From the Headlines by Paty Jager”