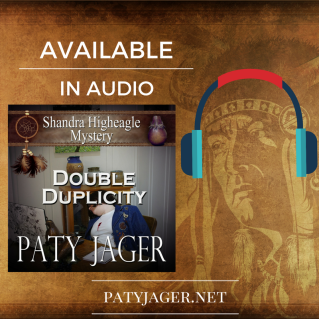 I’m happy to say my first mystery audio book is now available! This has been a dream of mine since my first book in the Shandra Higheagle mystery series was available to purchase in ebook and print.

From the very conception of this series, I could hear the voices and couldn’t wait to hear them “for real.” I have the seventh book released in ebook and print and now I can say I have one in audio. And the second book is already in production.

After attending a workshop at the In’Dscribe conference last summer by Ann M. Richardson also a narrator. One who is so wanted, I couldn’t afford her prices, but she had some wonderful insights into how to get a newer narrator and cultivate them into the narrator you want.  She said to get a better quality narrator and not someone just starting out, you had to pay some per finished hour and do the royalty share.

My goal by doing it this way and getting a more professional narrator, I will have more sales and can keep building the audio editions to this series.

The fist thing I had to do was listen to the audition files. I only had two, because I couldn’t afford more than $100 per finished hour. However, one of the two did a wonderful job, had only produced half a dozen book,s and her words were, “I’m coachable.” Those were the words I needed to hear, because, as I said up above, I had these characters’ voices in my head.  I also have some Nez Perce words in the books and they need to be said correctly.

Working on the first book with Ann Thompson, a Cincinnati radio news anchor, has been fun.  She doesn’t mind changing one word in a chapter or changing up voices when they don’t sound/feel right for the character.

I’ve listened to several audio books over the years. Some have been duds and some have been very good. I’m happy to say, that Ann is doing a great job with Double Duplicity.

Do you prefer audio or print/ebook books?

Leave a comment and I’ll pick one person on Saturday, 2/18 who will win a code to download the audio of Double Duplicity for FREE.

Book one of the Shandra Higheagle Native American Mystery Series
Dreams…Visions…Murder
On the eve of the biggest art event at Huckleberry Mountain Resort, potter Shandra Higheagle finds herself in the middle of a murder investigation. She’s ruled out as a suspect, but now it’s up to her to prove the friend she witnessed fleeing the scene was just as innocent. With help from her recently deceased Nez Perce grandmother, Shandra becomes more confused than ever but just as determined to discover the truth. While Shandra is hesitant to trust her dreams, Detective Ryan Greer believes in them and believes in her.

Can the pair uncover enough clues for Ryan to make an arrest before one of them becomes the next victim? 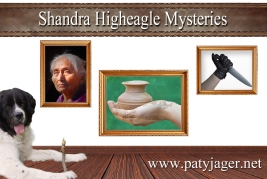 9 thoughts on “Print or Audio? by Paty Jager”