In which a liar lying on a beach lays to rest all possible confusion about the words for reclining, telling falsehoods, and setting things down. 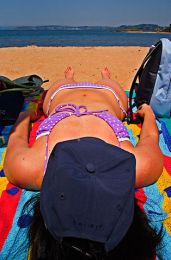 I should be at home laying tile in the kitchen, but I instead I’m lying on the beach. I called my husband—ex-husband-to-be—and lied, telling him Grandpa’s home health aide had called in sick and that I’d have to stay with Grandpa all day. The kitchen can wait. We’re only fixing it up so we can sell the house for a higher price after we move out and go our separate ways. I lie on my back and close my eyes, lay my phone on the blanket, and then remember to turn it off. When I’ve lain here long enough, I’ll get up and wade in the waves. But not yet. When was the last time I was free to just lie around and be lazy? I swear, I married a slave-driver. I’m not going to miss him. Once, I lay in bed until nine o’clock and Dan listed all the things I could have accomplished if I’d gotten up at seven. On a Saturday. Today, I’m making up for lost time

I wake with a start, wondering how long I lay asleep in the sun. I reach for my phone to check the time, but it’s not where I laid it. My hand grabs a man’s ankle instead. I look up to see Dan’s attractive young assistant, Sebastian, holding my phone and smiling down at me.

“Bad lie.” His voice is low and teasing. “Your grandfather’s house is on Dan’s way to the office. Your car wasn’t there. And he said he heard gulls in the background when you called.”

Darn. The best-laid plans of weary wives … “And he sent you to make me go home and lay tile? You’ve got to be kidding.”

“He sent me to go look at a property we’re leasing for the business.” Sebastian takes off his shirt and lays it on the sand, then lies beside me, propped up on his elbow, grinning. “Of course, when he mentioned your call, he complained about what a lazy wife he has. He doesn’t appreciate you, Celia. So, I lied, too. And here we are.”

His half-bare body is as beautiful as I’ve often imagined it would be. The longing that has lain dormant in both of us for years awakens, and we embrace. On someone’s radio in the distance, Bob Dylan’s classic love song, “Lay, Lady, Lay” is playing. Sebastian laughs. I ask him what’s so funny, and he says, “It’s such a sexy song, but I always wonder what he wants her to lay across his big brass bed? A silk duvet? Granny’s crocheted afghan?”

“Her body, silly.” I kiss his neck and nibble his earlobe. “He wants her to lay her body down.”

“Then he should be asking her to lie—”

For more fun with lie and lay, check your mastery of these words with a couple of quizzes.

I’ve never written anything in first person present tense before, so this experiment was fun for that reason as well as my attempt to incorporate every possible variation on lie and lay in a story as short as NPR’s three-minute fiction. (I’m sorry it’s not a mystery, but with the characters both lying and lying, the thematic words lent themselves more to a tryst.) I was inspired by Jane Gorman’s entertaining homophone post and by my encounters with lie/lay confusion in print and in speech.

Occasionally, I take yoga classes taught by a young woman who understands the human body and teaches well, but she uses the transitive verb lay for the intransitive verb lie. When she wants her students to assume a supine or prone position, she says, “Lay on your back,” or “Lay on your stomach.”

In some parts of the country, this is a regional speech idiom, and of course it occurs in popular music. Perhaps that’s why it’s confusing for writers. I’ve found lay/lie errors in published books, overlooked by editors and proofreaders. Even the grammar-check function in Word is confused, and occasionally tries to supply the incorrect word. It found fault with one of the two quotations from the ungrammatical yoga teacher and not with the other.

I can’t bring myself to make any of my characters talk the way she does, even though it would be more realistic if a few of them did.  What about you?

Comments welcome! Lay it on!

Photo credit: The lead image was originally posted to Flickr by J.C. Rojas at http://www.flickr.com/photos/jcrojas/194663540