Recently I attended the Public Safety Writers Association’s annual conference and one of the panels was, “Are You a Pantser or a Plotter”. The attendees were a mixture of many law enforcement types, fire and emergency medical personnel, and of course, mystery writers.

Everyone who comes is a writer, or wants to be one. Some of the public safety authors are writing non-fiction, though many are writing mysteries.

When this panel was introduced, many in the audience had no idea what a “pantser” was. For anyone reading this post who also might not know, a pantser is someone who writers from the seat of their pants. In other words, they don’t do an outline of the plot before they start writing.

However, as the panel discussed the topic and who did what, it turned out that even the pantser did some planning ahead of time.

I’ve been writing novels, and mostly mysteries, for many years. When I wrote historical fiction, I did a lot of research and the research helped me with the plot of the book, though I didn’t actually do a chapter by chapter outline.

Now, with my mysteries, this is how I go about starting a new book.

First, because I write series, I know who my main characters are. I also know where I left off with their lives. What I need to plan is the crime(s) or mystery part which entails new characters:

Who will die?  At least most of the time this is necessary. (In my last Rocky Bluff P.D. mystery, Violent Departures, the main mystery was about a missing young woman, the only murder happened years before.) 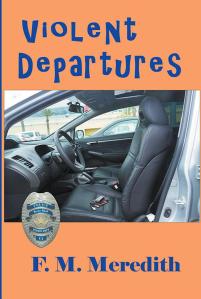 Who would like to see this person dead and why? Of course there must be more than one person who had the motive and opportunity.

With new characters, they must be named and described.

How is the person going to die? I try to come up with new ways to kill off my victims.

When and where will the first scene take place?

Once I’ve made these decisions—and I’ve written them down, I usually begin writing. I try to come up with a first sentence that will immediately intrigue a reader.

As I write, new ideas flood in. So I don’t forget something that may happen later one, I have a notebook beside my computer where I keep notes about everything pertaining to the book I’m writing.

So, though I don’t outline the complete plot before I begin writing, I do some initial planning, which I think means I’m a combination Pantser/Plotter.

For you other writers reading this, which are you?

15 thoughts on “Are you a Pantser or a Plotter? by Marilyn Meredith”