That got your attention, you sticklers for grammar and its rules. For those who’re fast and loose with this part of the writing universe, you’re (maybe) applauding me I’m with you.

Before we get into the breakdown of the English language and what it isn’t and is, let’s explore some history.

From what I’ve remembered in my Greek & Latin Roots of English more than two decades (twenty years or a “score”) in completing my B.A. for journalism, our language has evolved through the Germanic and Hellenesic Wars. It also took on much change during the Battle of Hastnigs in 1066. An all day bloody battle, taking out King Harold allegedly with an arrow through his eye, ended his reign and destoryed his forces. Harold had been the final Anglo-Saxon King of England.

More of what History.com says about this war: “After his victory at the Battle of Hastings, William marched on London and received the city’s submission. On Christmas Day of 1066, he was crowned the first Norman king of England in Westminster Abbey, and the Anglo-Saxon phase of English history came to an end. French became the language of the king’s court and gradually blended with the Anglo-Saxon tongue to give birth to modern English. (Illiterate like most nobles of his time, William spoke no English when he ascended the throne and failed to master it despite his efforts. Thanks to the Norman invasion, French was spoken in England’s courts for centuries and completely transformed the English language, infusing it with new words.) William I proved an effective king of England, and the “Domesday Book,” a great census of the lands and people of England, was among his notable achievements.”

This book of my former professor’s, now in its sixth edition, says, “More than 60 percent of all English words have Greek or Latin roots; in the vocabulary of the sciences and technology, the figure rises to more than 90 percent. Through the study of the Greek and Latin roots of English, students can expand their knowledge of English vocabulary and also come to understand the ways in which the complex history of the English language has shaped our perceptions of the world around us.

“The Greek and Latin Roots of English maintains the book’s much-praised thematic approach. After an essential overview of world languages, and the linguistic histories of Greek, Latin, and English, the text organizes vocabulary into various topics, including politics and government, psychology, medicine and the biological science, as well as ancient culture, religion, and philosophy. The sixth edition features revised cumulative exercises in each chapter that reinforce both vocabulary and analytical skills learned from pervious chapter. The [sixth edition] also features alphabetized vocabulary lists, new photos and cartoons, and other reader-friendly updates.”

I (naturally!) aced this class. I’ve always loved words, how they were used, what their breakdowns were, why some words stuck and others didn’t, etc. To expound on my recent post mentioning Schoolhouse Rock and how well I did with English because of those cartoon segments, that’s how certain parts of speech made more sense and opened horizons and doors for me. Until diagramming sentences came into my world in high school, that is. I didn’t bomb those; I got cratered. But I made up for it in doing well in other parts of speech, vocabulary, subtect, contextual meanings the author was exploring, and spelling. My favorites to this day: adverbs, prepositions, conjections, interjections, punctuation marks, similies, May-the-Fours (that’s metaphors to you in Rio Linda, haha!), and plays-on-words, or more commonely know as puns.

This post was inspired by a Little House episode (“School Mom”) where Caroline Ingalls pinched hit as a substitute while Walnut Grove’s regular teacher recovered from an injury. Among her charges was a near adult-aged boy near illiterate, a “Hold my beer!” moment for Caroline when her girls called the boy “Dumb Abel.” But it was a segment of this episode that always makes me misty-eyed: Each child holds a printed letter in front of him, and they takes turns representing their letter to eventually form a word. This, over time, helps the boy become literate (and sealing Landon’s often Disney-ending writing for this show–which is why I find the writing of The Waltons much stronger.). The teamwork behind this colossal effort, the simplicity in which words are just letters strung together in a certain order, and the light in his eyes how everything made sense broken down in simpler elements, was moving. That, and more importantly–somebody cared enough to care. And you’re never too old to learn, as evidenced in the fantastic book Life is So Good. So why should the adverbe, or any parts of speech for that matter, be shorted on one’s say so? 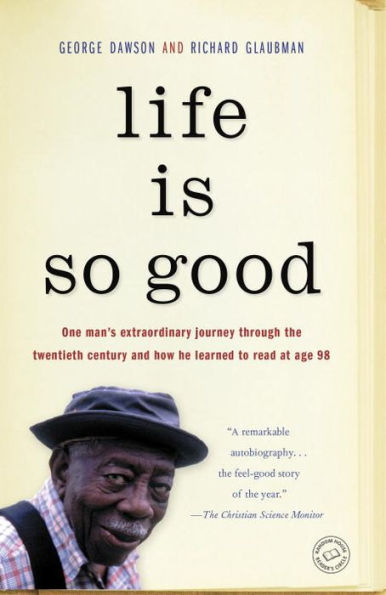 After the show, I wondered about how anybody–writers, authors, cumudgeounly Enlgish teachers and grammaticitians, real, imagined, or self-appointed–ALWAYS have something nasty to say about somebody else’s use of the language. Foreigners are laughed at, made fun or, or corrected to their face about its use when it’s not their first line of communication. Deaf or hard-of-hearing had to evolve sign language to its bare bones; I know a little ASL to converse in it slowly. For pregnant, they place their hands so their fingers are a third on top of one another, palms down, and arc them from their bodies to touch the bottome of their bellies. Together means hooked index fingers to “link” them. Asking the time means pointing at your wrist and holding up your fingers to represent the number; thank you mean to blow a kiss; yes means to nod your head or your fist; no means to shake your head or that fist side to side; hot means to fan yourself; cold means you hug yourself is if you’re freezing; and walking means moving your index and middle fingers in a method in how legs would walk. See where this is going? So since when did those who speak English get to be the arbitors of what’s right to say and not to?

So if a grammaticitian comes into your world, dead-set on your speaking properly in your writing as strict as the grammar rules are, your end results may come across stuffy at best, or reading like the worst pain in the ass Grammar Police Patrol you’ll ever know handcuffed you and your creativity. Nobody needs this–not you, not me, and certaintly not readers. So it shouldn’t be any surprise to you, Dear Reader, when I came axross the trend of–

DON’T USE ADVERBS IN YOUR WRITING!!!!!

all the F over social media. Done by a genre-creating author, yet, with the bestest-selling book on the craft of writing in publishing history, save for The Elements of Style.

While everyone might’ve taken this author’s word as gospel, I had to contest the premise–little ol’ David me daring to cross swords with the Goliath, multi-award-winning bestseller. Not so much I come by dissension naturally–if some of you saw my recent unapologetic and unrepentant stirrings and stances in a writing group, you’ll know what I’m saying. But adverbs are one of the pillars of parts of speech; that’s like saying you’re overusing nouns, or you’re breathing too much. Instead, this author should’ve declared JUST as boldly–

Didn’t happen. So I did it.

I was applauded in some cases–“Thank you, Scribe, for sticking up for us foreigners newly learning English.”–but for the most part, people attacked me in perception I attacked him! Was I a bestseller (No.)? Was I jealous (**laughing** Hardly.)? Oh, yeah? Where’s your book (In my computer, thank you for asking. Next!)? Gonna self-publish because traditional houses think you suck, huh (Um . . . some who’re traditionally published with contracts as thick as my femur is long are more interested in checking a PC box than honing decent writing for repeat business, and that ain’t me, so . . . NEXT!)? And so the storm raged. But I held my ground for the lowly, ain’t-good-for-nothin’ adverb. Inevitably, the next part of speech to be attacked, which I meant satirically, was the semi-colon. I called it–but I was only kidding! The bullies weren’t. And still ain’t–they’re attacking free speech altogether, never mind parts of it, but that’s another topic for another post.

Here’s the thing: all parts of speech, punctuation, consonants, vowels, and its references, have a place, even the ugliest of words. They. ALL. Have. A. Place. Yes, there is such thing as too much telling. There is also such thing as too much showing. And too much setting. Too much descriptions. Too much backstory. Too much info-dumping. Too much . . . too much . . . too much . . .! So it’s the adverb’s time to be bullied. In an era of can’t we all just get along, there sure is a lot of bullying going on we’re told to not do otherwise. And taking adverbs out of sentences for the sake of, guess what happens to and with that sentence? Its subtext and context are changed subtly and obviously so the paragraph around that one sentence with the shameful adverb being cross-examined is also changed. Leave the adverb alone. It’s has a place–so let it do the job it’s supposed to do.

And there is such a thing as too much use in strong verbs, too; once everyone’s doing it, and is doing it, what makes it special in that piece of writing anymore? To steal a phrase from one of my many favorite PIXAR movies, The Incredibles, where Syndrome says, “Once everyone are Supers . . . no one will be,” is just as fittin’ here as it is anywheres else.

Not bad advice from a villain, despite discovering too late his cape was a bad idea. So you too, Dear Author for your even Dearer Readers, don’t let YOUR writing cape do you in on the adverb, either. ‘Sides, if Superman and Batman and Robin handled theirs with finnesse and class, please make your use of grammar just as messy to match your imagination. Do so freely, wildly, often, richly, and boldly.

Missye K. Clarke, forever an old-school NYC gal at heart, resides in central Pennsylvania. Over the course of her life, she's had too many book beaux to count, but has two in the McGuinness cousins. Find Ms. Clarke's first McG/P Casebook on Amazon and other fine online outlets. View all posts by Missye K. Clarke

3 thoughts on “English Language Be Gettin’ a Bad Rap Like a Overrated Airport Sammich!”