for the latest in my Deputy Tempe Crabtree series to be published–August is the target date. To say I’m excited is an understatement because I’m really proud of this book. 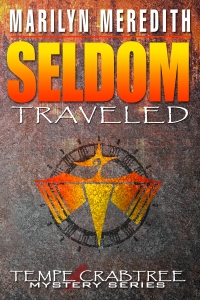 The tranquility of the mountain community of Bear Creek is disrupted by a runaway fugitive, a vicious murderer, and a raging forest fire. Deputy Tempe Crabtree is threatened by all three.

Tempe is back in Bear Creek, it’s fall and fire season. Here in Springville it’s summer and we’re already experiencing fires all over California.

A while back a fugitive escaped and disappeared in our foothills–a similar thing happens in Seldom Traveled.

But as often happens, as I was writing this book, the plot took off in a different direction than I’d planned.

I’ve yet to plan a launch party for this book, but I have several other events already planned–in September I’ll be at the San Luis Obispo book fair, in October traveling to Manteca for the Great Valley Book Festival, and in November I’ll be participating in the Porterville Art Gallery’s Holiday Boutique.

And yes, I’m doing yet another blog tour beginning September 3rd. And as time moves along, I’m sure I’ll be busy with other events.

4 thoughts on “Time is Drawing Near”