The Adam Kaminski mystery books each take place in a different city or town around the world, but they all have one thing in common: Detective Adam Kaminski.

I’d like to use this month to introduce you to Adam, give you a chance to get to know him a bit. He’s a strong man, a brave man, but also a man with a few problems. In fact, for What She Fears, book 4 in the series, I had to write a psychological evaluation of Adam (something to do with his behavior in All That Glitters…). That was an eye opening project!

For this blog, instead of providing a psychologist’s perception of Adam, I thought I’d let Adam speak for himself. So here’s Adam Kaminski, describing himself in his own words:

I grew up in Philadelphia. The Port Richmond neighborhood, d’you know it? It’s not bad. We were happy. Well, I was happy. Dad worked hard. A lot. Mom, too. Dad’s first generation American. His dad came from Poland with his father — my great grandfather — during the war. Lots of stories there, I’m still looking into that.

We didn’t have a lot of money but my folks managed to put me and my sister through college. I helped out. I had a couple of scholarships, a few part time jobs. It all paid off — I got a teaching gig right out of college. I guess it’s easier to get a job teaching history if you’re willing to work in the city. I didn’t see a reason not to. It’s where I lived, where I grew up. Why not teach the kids growing up around me?

Man, my folks were proud of me. They always taught me how important education was. The most important thing, right after family…

Adam pauses to take a sip of the water on the table next to him, wiping the condensation from his hands onto the legs of his jeans.

I’m still in Philly. But I don’t teach anymore. Not anymore, not after….

Look, all that matters is, now I’m a cop. There are bad guys out there and it’s my job to catch ’em, to stop them from hurting anyone else. Turns out there is something even more important than education. I learned the hard way, you gotta keep your kids alive before you can think about teaching ’em. You can’t teach a dead kid.

The psychologist suggests a break, but Adam shakes his head. He’s fine to go on, just get this over with.

I liked teaching. I’d like to think there’ll be a time I can do it again. Without remembering those other kids. The ones who didn’t live. The ones I didn’t protect.

For now, I’m focusing on the job. It’s good. I’ve got a great partner, Pete. He keeps me in line. I can get angry sometimes but Pete, well, he’s by the book. Absolutely. Keeps me steady.

Adam’s leg has been bouncing up and down as he speaks. He seems to notice it and he crosses his legs, right ankle on left knee, the chair squeaking as he shifts his large frame.

Oh, but on the plus side, I just got engaged. Kind of exciting. It’s been a rocky relationship, but I think we’re good now. She’s not close to her family. I met her when I was in Warsaw. I went out there for some easy, political visit. Right? Ended up solving a murder. Trouble seems to follow me. It was tough, but it brought me closer to my cousin in Warsaw and I met her, so that’s good.

Now I just need to convince her that my job is a good career. There’s nothing wrong with being a cop. She should be proud of what I do. She doesn’t like to talk about it much. With her friends, at her job. But I think she’ll get it. Then I’ll know we’ve made it.

The psychologist asks what lessons Adam has taken away from his life experiences.

Always protect the ones you love. And do the right thing. It’s not always easy. But it’s worth it. 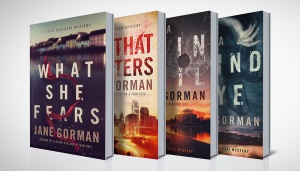 Learn more about the Adam Kaminski mysteries at my website, janegorman.com.

Start with the first in the series, A Blind Eye, available at Amazon, Nook, iBooks, and other retailers.