The Sisters in Crime/LA booth is in the mystery section, next to the booths of Mystery Ink bookstore, Mystery Writers of America and Mysterious Galaxy bookstore. It’s in a great location close to the main walkway, and we get a lot of visitors stopping by.

This year I was part of a team scheduling slots for our members to sign their books. Requesting a signing time was a complicated process involving a form provided on the website of Sisters in Crime National. We allocated signing times based on when applications were received, and there were lots of applications. Invariable, people signed up and then changed their minds, and people forgot to sign up and then asked for the most desirable slots. But there was less confusion than I had imagined.

Signing slots were two hours each, except for the slots between noon and two p.m. which we broke into one-hour segments because these seemed to be the most desirable signing times. All the slots were taken except for Sunday from 4 p.m. to 5 p.m., the end of the festival.

Friday, when we were scheduled to set up the booth, rain was predicted. Not a usual occurrence in April in Southern California, but this is the year of el nino and climate change, so who knows what’s going to happen? Anyway, there was a firm prediction of rain for Friday night, so we were reluctant to put books out in case a wind and rain storm blew all the coverings off. So we arrived at 7 a.m. on Saturday to unpack books, sort them out and place them in the various book racks and stands. Our six feet by eight feet space was pretty full with two tables and five chairs for signers, three tables for books, a table for merchandise and one for those selling the books.

Saturday morning was quiet with some drizzle. I was surprised at the number of people who had come out for the Festival despite the weather. At about noon, the rain began to come down in torrents. We moved the tables further into the booth, making the already 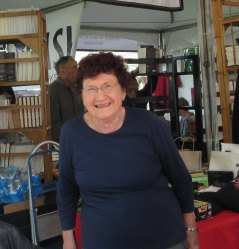 small space incredibly cramped with no possibility that two people could pass one another inside the small area. However, we managed, and the heavy rain finally ceased. In the afternoon we had lots of visitors.

Sunday was beautiful, the rain gone, and a great many people visiting the Festival of Books. All in all, it was estimated that 160,000 people came to the Festival over the weekend, and we sold nearly two hundred books, quite a remarkable number. Not surprisingly, people came in bunches to buy books with nothing happening for twenty minutes or half an hour, then four or five people arriving and wanting to purchase books at at once. Why is that? It seems to me it happens whenever I sign people up or sell anything. Do you find that that’s true for you?

Anyway, it was a fun and exhausting weekend, we sold a lot of books and made a lot of mystery writers and readers happy. It was a confirmation for me that people still read and still read books, not just electronic devices like Kindle. And that makes me very happy. And, I got to have my favorite sandwich, which I only allow myself once a year: a bacon, lettuce, tomato, and avocado sandwich with aioli, a BLTA. Delicious!

I grew up in New York and moved to California when I was in my twenties. I was a Peace Corps volunteer in Africa and when I returned I got a master's degree from the University of Southern California. I worked as the administrator in a public law office, and now I write mystery novels of the "whodunit", multiple suspect, police procedural variety. I live in a small town in Southern California with my husband and two dogs. View all posts by casojka123