I never thought the way I spent some of my school holidays as a child would be the inspiration for a crime scene in a novel.

When the summer rolled around and school broke up for six wonderful weeks I’d eagerly await the occasional days when I would get to accompany my dad to work. Before he retired, my dad was a contract haulier for a local quarry. He drove a 32 tonne truck. It was a monster of a vehicle. I had to be lifted up to clamber onto the edge of the wheel arch and into the cab. In the days before seatbelts and health and safety I was allowed to sit on the 2 seats on the passenger side of the cab unencumbered or even perch on the centre console (the engine manifold) next to the driver’s seat.

We would pick up and deliver huge quantities of sand and various types of stone and gravel for road building and construction. Being something of a tomboy as a child I loved all the noise and dust. I’d watch in awe and excitement as huge dumper trucks cruised past, so large they dwarfed my dad’s lorry. I can still remember sitting in the lorry as tonnes of stone cascaded into the back of it from the imposing-looking grey metal buildings where the stone whizzed around on conveyor belts. There was also a scarily (but aptly) named crusher which took the big-as-a-car sized chunks of rock and reduced them to gravel size.

At the end of the day I would dash up the steep bank which bordered the quarry as my dad and I walked home. It was just a ten minute stroll if we cut across the woods, through the meadow and hopped over the stepping stones in the stream. I would arrive home scruffy, exhausted but happy.

As a child it never occurred to me how dangerous an environment quarries were. As an adult when I felt the urge to switch from writing romantic comedies to cozy mysteries, I knew straight away where the first crime investigation was going to take place – a quarry!

In book one of my Amber Reed Mystery series, Amber – a barmaid and newspaper admin assistant who makes up horoscopes for the local paper – finds herself in a quarry in the middle of the night with handsome special agent Charlie as they try to find out just what is going on at Set In Stone. Amber gets caught up in the murder investigation because the victim is the brother of her ex- boyfriend Ennis. Now a movie star, Ennis pleads with Amber to help out by keeping an eye on special agent Charlie Huxton, sent by the Celebrity Crimes Investigation Agency to catch the killer. Ennis, harassed by paparazzi, is paranoid Charlie might be feeding news on the story to the media so he wants Amber to keep a close eye on the CCIA agent.  Whilst trying to help out her ex Amber’s life gets very complicated indeed… 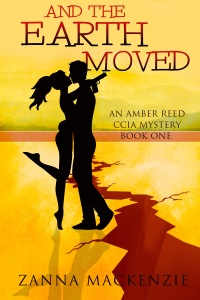 And The Earth Moved (Amber Reed Mystery Book One)

A new cozy mystery series with oodles of fun, romance and the smart, sassy special agents of the CCIA – otherwise known as the Celebrity Crimes Investigation Agency.

Amber wished her life was more exciting – then, with one phone call, her world turned upside down.

Now she’s got to cope with:

Getting herself caught up in the middle of a celebrity murder investigation.

Having to try and keep tabs on hunky special agent Charlie who’s in town to catch the killer – and convince him she can help him with the case.

Maybe her life just got too exciting….

Find this book on Amazon: http://getbook.at/AndTheEarthMoved

“What kind of excitement are Gemini’s going to have this week?” I ponder, tapping my fingers against the keyboard.

I’m a third of the way through making up the horoscopes for this week’s local paper. Aries are going to get news of a fantastic job opportunity. Capricorns will receive some kind of windfall. But what about Gemini? I always like to give my Madam Zamber horoscope column an upbeat feel – after all, nobody reads their star signs to get depressed right?

My fingers hover over the computer keys as I debate on Gemini’s fate. I’m a Gemini so this one better be especially good; it’s been a rough week.

My phone, nestled somewhere in the depths of my bag, starts playing a chart tune at full volume. When I eventually find it I check the caller display and see Ennis’ name.

Ennis and I haven’t spoken for a while but I know he came home last week after he’d finished working on his latest movie, he sent me a text. He probably wants to meet for a coffee and a catch up. It’s strange; to me Ennis is, well, just Ennis. I don’t think of him as a heartthrob actor, just my ex, my university boyfriend, who I meet up with for a chat whenever he’s in Palstone.

Time for a little break from the horoscopes. I hit the answer button.

There’s nothing but silence on the other end of the line.

“Ennis?” I sit up, instantly concerned. “Are you there? Is something wrong?”

His voice is so quiet I can barely hear him. “Joel’s dead,” he says.

“What?” I shout, leaping to my feet and earning myself a look of curiosity from the other two members of staff at The Palstone Courier.  I lower my voice. “How? What happened?”

“We don’t know yet,” he replies, his voice heavy with emotion. “But the police are saying he died in suspicious circumstances.”

“Look, Amber can you please come over?” Ennis says. “Now? Please? I need to ask you a huge favour.”

Zanna Mackenzie lives in the UK on the Derbyshire/Leicestershire border with her husband, 4 dogs, a vegetable patch that’s home to far too many weeds and an ever expanding library of books waiting to be read.

Being a freelance writer and editor of business publications is her ‘day job’ but, at every opportunity, she can be found scribbling down notes on scenes for whatever novel she’s working on. She loves it when the characters in her novels take on minds of their own and start deviating from the original plot!

Find out more about Zanna on her blog http://www.zannamackenzie.blogspot.co.uk, on Twitter via @ZannaMacKenzie or on Facebook at http://www.facebook.com/zanna.mackenzie

Find out more about Zanna at: