I decided I wanted to write a book about the Central Valley, where I’m now from which is a vast, hot, 300- mile-long expanse extending from Sacramento to the north and the San Joaquin Valley in the South, and has the most fertile areas in the United States for growing grapes. We produce a full 60 per cent of all the agricultural products in California and we crush 75 per cent of all wine grapes. Wineries are huge. And so are the crops.

One of the core differences between the wine industry in California and that in Europe is the people who run it. The California wine revolution of the 1960’s and 1970’s was largely initiated by men and women who were not from winemaking families. After the Prohibition, which lasted 13 years there were few people to train the newcomers, including Ernest and Julio Gallo, which makes close to 70 million cases, including popular inexpensive wine and Robert Mondavi Woodbridge wines which make slightly more than 6 million cases a year. The interesting thing is that these three self-made men were self-taught. Everything they learned they read out of a book.

Of course, my book, ‘Death on the Vine’ is not so factual, I have romance, murder, intrigue, lots of money, a socio path, and revenge. Some of this has some true parts in it but for the most part, it’s fictional. I will have a sequel to the book, I haven’t quite decided on a title but again it’s set in the small town of Oakhurst, California not too far away from Yosemite. Daisy, Frisco, and a whole host of characters will play a part…and another socio path.

I think you can see from my bio that I have familiarity with socio paths and quirky characters.

I have a contest running on amazon for a free book for Death on the Vine and if you read it, review it, I’ll want to put your name in my next book and maybe we can have a contest for a new title. 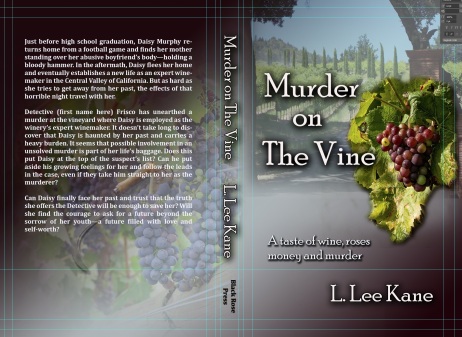 Murder on the Vine

Just before high school graduation, Daisy Murphy returns home from a football game and finds her mother standing over her abusive boyfriend’s body—holding a bloody hammer. In the aftermath, Daisy flees her home and eventually establishes a new life as an expert winemaker in the Central Valley of California. But as hard as she tries to get away from her past, the effects of that horrible night travel with her.

Detective Jake Frisco has unearthed a murder at the vineyard where Daisy is employed as the winery’s expert winemaker. It doesn’t take long to discover that Daisy is haunted by her past and carries a heavy burden. It seems that possible involvement in an unsolved murder is part of her life’s baggage. Does this put Daisy at the top of the suspect’s list? Can he put aside his growing feelings for her and follow the leads in the case, even if they take him straight to her as the murderer?

Can Daisy finally face her past and trust that the truth she offers the Detective will be enough to save her? Will she find the courage to ask for a future beyond the sorrow of her youth—a future filled with love and self-worth?

Linda L. Kane MA in Education, PPS, School Psychologist, and Learning Disability Specialist, is the author of Death on the Vine, Chilled to the Bones and an upcoming release of the The Black Madonna. She lives with her husband, three dogs, one bird, and eight horses in California.