I had a post written, went back in to add a little more, and lost the whole thing! Man, I hate when that happens!

I am finishing up a historical western romance book and getting ready to start on the next Shandra Higheagle book. It will be book 11 in the series and take place partly on the Colville reservation.  It will be the wedding book…or will it?  LOL That’s for readers to find out!

Shandra will go to the reservation to learn and practice a Nez Perce dance she wishes to incorporate into her wedding to Ryan. Having found her family and heritage at the same time as finding Ryan, she wishes to combine her two cultures in the wedding.  which means someone will get killed and she will want to help discover who did it and why with the help of her deceased grandmother. 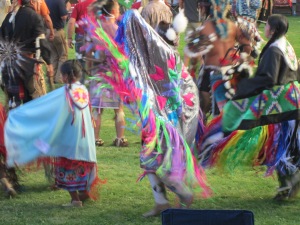 All the research–Shandra’s heritage, how someone could be killed and what the forensics would say, the legal information I need to know, and keeping it all plausible is what makes writing a murder mystery so much fun! It makes me think, piece things together, and then try and keep the reader from figuring out who did it while also dropping some clues in the mix.

In a way writing a mystery is a lot like baking a cake. You have to read the recipe, which in this case decides the who, what, and why. Gather your ingredients — in my case gather my suspects.  Then mix together the ingredients or in the case of the book put together plausible scenes that show and deceive at the same time. Add a little something special that makes the cake or the story interesting and enjoyable, all the while holding out on what the “secret sauce” or killer is.  Then ice the cake with something delicious and come up with an ending that surprises the reader, yet was there all along. 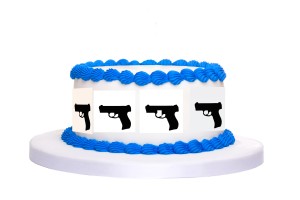 I must have used the correct recipe on Haunting Corpse, book 9 in the Shandra Higheagle Series because it is a finalist in the paranormal category of the Daphne du Maurier contest. I’m honored that my book did so well in such a prestigious contest.

Another fun thing about my Shandra Higheagle Series, Books 1-6 are now available in audio! 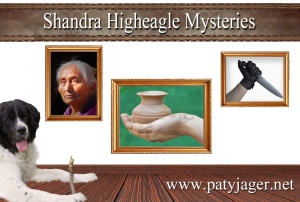 There’s not a writer out there who hasn’t brought something from their life into their writing. Writing whether for pleasure or for money, deals with everyday life experiences. It has to. One can’t bring the full flavor of life into a story without allowing something they have experienced to come into the writing.

Everyday happenings: the pungent aroma of coffee brewing, the dampness of mist walking on the beach, the blinding glare of light from an oncoming vehicle at night, the sweet and sour tingle on the tongue while eating candy.  All of these everyday things are used when writing. The senses and what we see and feel around us are used to show the characters in the same or comparable settings.

While figuring out who the murder victim would be and lining up suspects, I went back to memories of high school and found the one teacher who the boys made fun of and the girls found creepy.  He became my murder victim.

I made the victim worse than the real life teacher. And I gave the principal a reason for ignoring the complaints of the other teachers and students. Which, of course, added more suspects and widened the net of suspects to parents and significant others of the female teachers.

Students are more savvy to what is going on in their schools than teachers think. I used this and a person with a grudge to add even more fuel to the ffire that was about to explode at the school.

I can honestly say that I have more fun fleshing out my mystery books than I do the other genre I write. There is something therapeutic about putting the people or events that I’ve come across through my life into books and find my own justice. 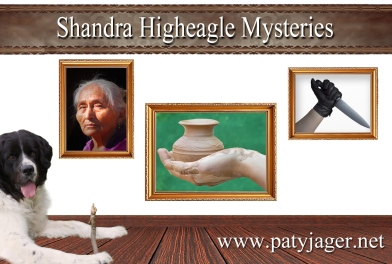 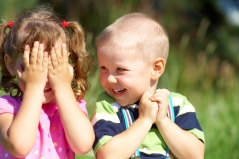 I feel like the little kid who has a secret and can barely keep from blurting it out. And I don’t really have a secret, but I do have three new Shandra Higheagle books that have me bouncing in my desk chair as I think about all the possibilities in the stories. And I will start writing the new mystery series this year. By mid-year I’ll start revealing bits and pieces about Gabriel Hawke, my new sleuth.

While I started out 2018 with a head cold given to me by my adorable grandchildren, I am beginning to pick up steam and getting more and more things accomplished in a day. That is what makes me happy and excited. The more I can accomplish, the more I can show my readers what I’ve been working on.

I know readers get excited about the next book in a series that they love, but writers, do you also get excited about revealing a new book to readers?  I’m giddy thinking about the book I’m working on, Artful Murder, and the other Shandra books that will come out this year, and I’m giddy knowing I get to start a journey with a new character.

Starting a new series and getting to know the main character(s) is like dating or getting to know someone who will ultimately become your friend.  First you see their physical qualities. Do they have flaws? Does that make you nervous or curious? Then you get to learn their personality. Is it flat, humorous, dark? Are they someone you think you could get along with? Do you want to spend time with them or do you want to learn more about them but keep them at a distance? How do they treat others? Animals? Do you like their voice or does it grate on you? What do they think of the subjects you are concerned about?

These are all the questions I’ll be asking my new character as I slowly build him in my mind and get ready to start his first book. But the fun part will be introducing him in book twelve of the Shandra Higheagle Mysteries. It will be interesting to see what Shandra thinks of Hawk and how they work together to solve the death of a hiker.

An FYI, you can now purchase Murderous Secrets, book 4 in the Shandra Higheagle Mystery Series in audio book at these audiobook outlets. 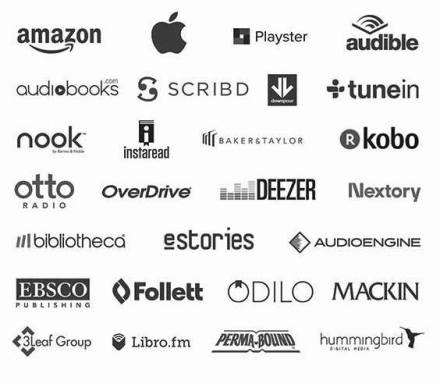 If you listen to audio books and put up reviews, leave your email in the comments section, and I’ll send you a code to download Murderous Secrets from Audible US or UK. 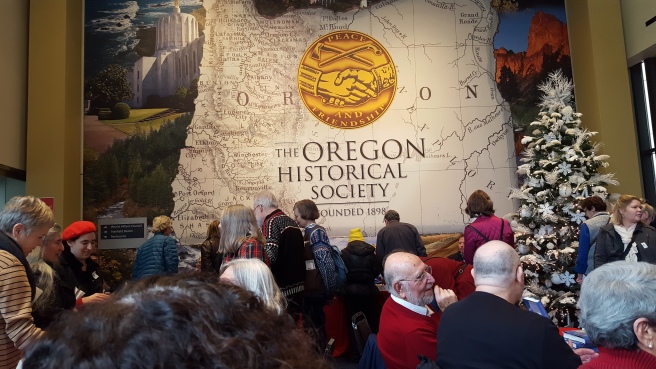 December 3rd I had the privilege of attending a 75 author signing event that had been held for 50 years at the Oregon Historical Society building in downtown Portland, Oregon.

I was hesitant to send in an application when I learned of the event but the application said they were looking for Oregon authors who had a book published in 2017 regardless of genre.  I entered books 8 and 9 in my Shandra Higheagle Mystery series and the first book of an older historical Native American romance trilogy. They said you could have up to three books and as long as one was set in 2017they were good with that.

When the  email came stating I had been accepted, I immediately ordered books and began to get excited for the event. It was different than most I’ve attended and was at ta place I’ve been wanting to visit for years, given the other genre I write is historical western romance. By being a signing author we received one year free use of the facility for research. That was an added bonus to me. 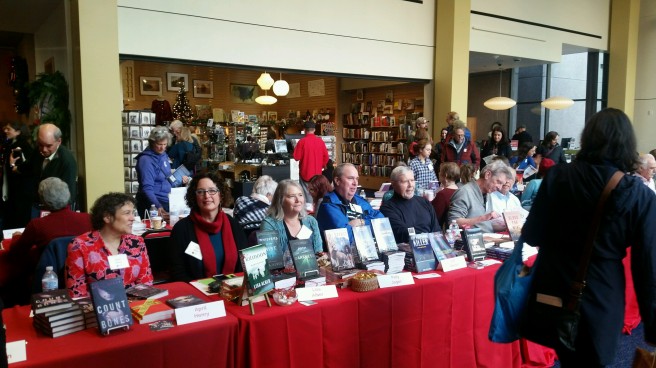 They had us set out three to an 8ft table, so we were elbow to elbow and you had to be friendly with your neighbors. Almost the whole long side of one set of tables were mystery, thriller, suspense authors. One writer, say, “Welcome to Murderer’s Row,” as people walked by.  The readers for this type of book were drawn in while other people made a wide circle from our tables.

I learned that attending an event such as this, you don’t take books 8 & 9 of a series. The authors whose 2017 release was the second, third, or fourth book in the series, sold the most books as readers would purchase all the books in their series.  I will probably go back next year with my new historical western series and then in 2019, I can go with the first books of my new mystery series.

As a mystery reader, do you prefer starting at the beginning of a series, even if the stories can be read as a standalone? 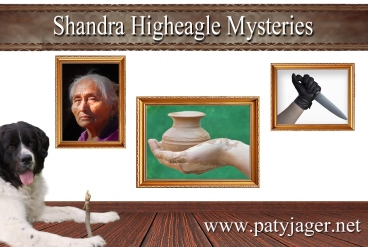 I’m not one of those people who has to buy every romance or mystery book that deals with a holiday. In fact, over the 50+ years that I’ve been a reader,  I’ve had one Nora Roberts set of romance books that were Christmas books that I read every year in December, but I didn’t read any other Christmas books. Then a friend wrote a Thanksgiving novella. I pull that out and read it in November. But that’s about it for reading holiday themed books.

And yet, I seem to write a lot of holiday themed books. In my romance books I’ve written three Christmas Stories, a 4th of July, New Year’s, Halloween, and Valentine story.

In my mysteries, I’ve now written a Christmas and a Halloween story. Last November I put out Yuletide Slaying with Sheba the pony-sized mutt as the character who discovered the dead body.

And this month, going with the theme of an animal finding the body in the holiday stories, Lewis, Crazy Lil’s orange cat, finds the body in Haunting Corpse, book 9 of my Shandra Higheagle Mystery series.

I found while planning this book, I didn’t really think about the holiday. My mind was focused on the murder and who could have done it. The Halloween party was merely used as a means to gather information for Shandra and Ryan and the reader. But I had fun writing the party, the costumes, and the conversations.

Do you find as a reader that you like to read between the lines of the conversation and character’s actions, to try and discover the murderer? Or do you just let yourself go with the flow of the story and be surprised at the end?  Writer’s do you try to make your characters’ conversations relevant to giving clues or do you just write what comes to mind and drop a hint here or there?

Here is the blurb and cover of my newest Shandra Higheagle Mystery.

A runaway bride, murder, and arson has Shandra Higheagle sleuthing again. Sorting through the debris of her best friend’s childhood, Shandra believes she must solve the murder before her friend becomes the next victim.

Stumbling upon a dead body, Detective Ryan Greer is determined to bring the killer to justice before Shandra becomes too entangled in her friend’s dysfunctional past. He hopes he’s not too late. Her deceased grandmother has already visited her dreams, putting Shandra in the middle of his investigation and danger. 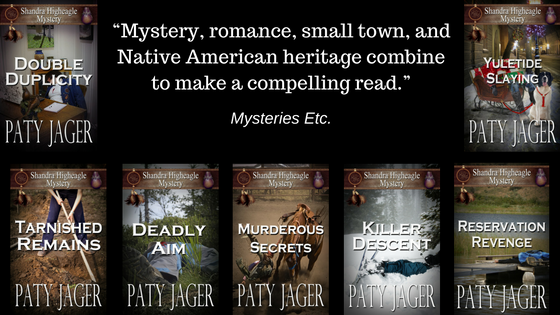