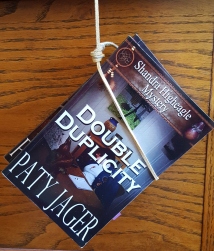 I’ve been contemplating when to end my Shandra Higheagle Mystery series.

Book eight, Fatal Fall, released recently. Book nine is in the planning stages, and I feel I could get another five or six books out before the story/characters go stale.

However, I’ve already had people asking me when am I ending the series.  My comeback, “Why, are you tired of the characters?”  I’m not tired of writing about Shandra, Sheba, Ryan, Lil, and the cast of characters who live in Huckleberry and Weippe County. I do worry about the people who complain, you can’t kill anymore people off in that small area.

But really, this is fiction. Is it that hard for a reader to suspend belief that so many murders could happen in an area and with the same amateur sleuth being involved?

I have taken Shandra to the reservation a time or two and plan to have another story or two set there. She and Ryan are going to a police conference and an art show in two different books. Kind of like Jessica Fletcher moving to New York or going to book related events out of Cabot Cove. 😉

The other reason I am contemplating the demise of the series, is because I want to introduce the amateur sleuth for the next series in one of the Shandra books before the Higheagle series ends. But I want to wait until the last or next to last book.

And yes, it will be another Native American character. I am still working out the details of him, where he lives, what he does for a living, and how I can connect it to multiple murders without getting into the “too many deaths” in one small area.

How do you gauge when a series has run it’s course?  Have you read a series or two that went on too long? Do you think there is a magic number of when a series should end or is it best to leave it up to the story and characters?

I would love to hear readers and writers thoughts on these questions.

Books 1,2, & 3, Double Duplicity, Tarnished Remains, and Deadly Aim are out in audio book.

Here is the info on Fatal Fall:

When the doctor is a no-show for her appointment, Shandra Higheagle becomes wrapped up in another murder. The death of the doctor’s elderly aunt has everyone questioning what happened and who’s to blame. Shandra’s dreams soon tell her she’s on the right path, but also suggests her best friend could be in grave danger.

Detective Ryan Greer knows not even an illness will keep Shandra from sneaking around, and he appreciates that. Her insight is invaluable. When she becomes embroiled deeper in the investigation, he stakes out the crime scene and waits for the murder to make a tell-all mistake.

But will he be able to act fast enough to keep Shandra or her friend from being the next victim?

Dream your dreams with your eyes closed…

But live your Dreams with your eyes open—

The amateur sleuth in my Shandra Higheagle Mystery Series is half Nez Perce. She was raised to hide her Native American heritage when her Nez Perce father died and her mother remarried. However, her paternal grandmother kept in touch, and Shandra spent a summer during her teen-age years with her grandmother on the reservation. Her grandmother said Shandra had powers. When Shandra announced that at home her mother and step-father quickly made her see it was an old woman’s way to making an awkward teenaged girl feel special–nothing more.

As an adult, Shandra visits her grandmother more and is interested in discovering more about her roots. But her grandmother dies, leaving Shandra a note requesting she attend the Seven Drum Ceremony after the funeral.

While in the midst of murders and mystery, Shandra’s grandmother comes to her in dreams showing her clues to the true murderer. While Shandra investigates the dreams and discovers helpful information, she has a hard time believing the dreams and her grandmother’s presence.

This is the information I came up with when I was brainstorming who my amateur sleuth would be in the mystery series I wanted to write. I started with the niggling that I wanted a Native American character. But not being Native American myself, I didn’t know the first thing about being from that heritage. That’s when I came up with the idea of her being kept from those roots. It allowed me to discover Shandra’s heritage as she is discovering it, a piece at a time.

To add a bit more of the “mysticism” or “dreamer” qualities to the Native American element I have her deceased grandmother come to her in dreams. Visions and dreams are instrumental in Native American culture. This was my way of drawing on elements that could be intrinsic to Shandra.

And all amateur sleuths need a person in law enforcement to keep them safe. I gave Shandra handsome Weippe County Detective Ryan Greer. He believes in Shandra’s dreams more than her in the beginning thanks to his Irish mother who taught him to believe in things you can’t see.

I’m enjoying getting to know Shandra and Ryan better with each book I write and having them meet the locals of Huckleberry, Idaho and the unique murders that draw Shandra into the investigations. And I can use the backdrop of the ski resort and the art communities because Shandra is a potter whose works are considered art.

What draws you to the main character in a mystery series? What elements in a character haven’t you seen that you would like to see?

Writing into the Sunset