One of the common images seen in crime and mystery stories as well as Halloween decorations is that of a black cat prowling in the night, a sinister and evil figure. Yet most black cats are just as friendly and playful as other cats. In the words of Curly Howard, they’re “a victim of circumstance!” How did black cats get such a bum rap?

A black cat is not a specific breed. The Cat Fanciers Association allows solid black coloring in 22 of its recognized breeds. The only breed with all-black felines is the Bombay, produced by mating a Burmese with a black American Shorthair. Male cats are more likely to be black than females.

A common variation on the color is the “tuxedo cat,” a black cat with a white chest and sometimes white paws, as illustrated by my dumpling, Boots. 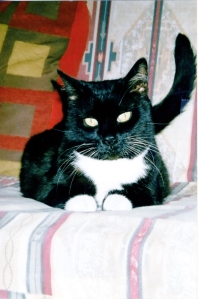 Pop culture has produced such black cat heroes as Felix, who debuted in 1920s silent cartoons, and Snowball II of “The Simpsons.” In the 1970s John Lennon had a black cat named Salt and a white one dubbed Pepper.

Black cats were not always stigmatized. In Egypt around 3,000 B.C., cats were worshiped. The goddess Bast (also spelled Baast or Bastet) was often depicted as a black cat or a woman with the head of a cat. Killing a cat was a capital offense, and dead cats were often mummified. As early as 1,000 B.C. cats were domesticated as pets.

In Asia and Scotland, black cats are considered lucky.

But in Europe during the Middle Ages, cats were seen as the familiars of witches. The sight of poor, single women feeding feral cats gave rise to this idea. The belief was that cats could change into human form and spy on persons. Early settlers to America brought their superstitions with them.

In the 1300s, communities killed hundreds of cats, resulting in a rise in the number of rats that then spreaded bubonic plague, the “Black Death” that killed millions of Europeans.

In modern times, blacks still have bad luck. In animal shelters, black cats are often the last color of animal adopted and the first that is put to sleep. Shelters often have more black cats than any other cat color. One local shelter stated that guests often see the more brightly colored animals before they notice the black cats, so the darker pets are often missed. This is Felix, a stray that some people found and turned over to my vet for treatment and who ended up in my house. 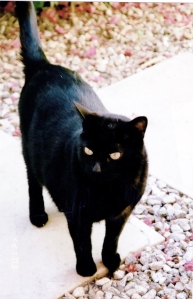 Pet owners in England are ditching their black cats because they claim the animals don’t photography well in selfies, according to www.mirror.co.uk. The RSPCA (Royal Society for the Prevention of Cruelty to Animals) reports that 70 percent of the unwanted cats housed in its national animal centres in England are black or black and white.

But according to my experience, black cats make wonderful pets. I don’t know why but all of my cats have been gray or black. I didn’t set out as a “black-only” owner; in one case the cat chose me. Maybe these felines know I’m a sucker for an outcast or a hard-luck story.

So next time you’re writing that detective story, pause before putting that black cat in a dark alleyway. Why not make it white dog?

This post is based on an article previously published in the Acorn Newsapers.

View all posts by sandyfairfax

12 thoughts on “What’s so mysterious about black cats?”