Every plot is the same. But they’re all different. If the story is written well, the reader is aware of the difference, not the sameness. The sameness is structure. No one looks at a dog and says, “How boring, it’s got four legs and a tail.” That’s the structure. What we notice is the difference. My friend Bob’s dog is golden brown and sort of dingo-ish. He says she looks like a kid’s drawing of a dog. She has a black spot in the middle of her tail and another one in the middle of her tongue. She loves all humans, dislikes other dogs, hates skateboards, and is scared of cats. It’s the differences that makes her interesting.

A trail I like to run is the same 1.5 mile loop every time. I go up the same hills, around the same curves, past the same desert shrubs, three times per run. It’s not boring. The plants change with the seasons. Wildlife varies from day to day—the creatures I see as well as the tracks others leave in the sand. In the winter, I encounter other people. In the summer, I only meet lizards and jackrabbits. 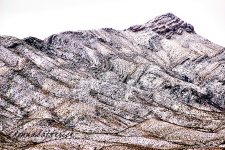 ak snowstorm this month dumped five or six inches in one day. (I should add that all snowstorms are freaks in southern New Mexico. We can go years with only a few random flakes.) The same mountains I see

every day looked entirely new, with snow on their contours and ridges outlining textures not normally visible. Turtleback Mountain’s Turtle seemed to be wearing pinstripes, a nice look on him.

Normal winter temperatures are in the fifties and sixties, and the next day went right back to normal. The remaining patches of snow from the day before changed not only my running pace on the trail but my perception. Most of the snow had melted, but I came across islands of it I had to detour around, going off the trail to avoid slipping. If thorny plants denied me that option, I had to slow down and walk through it for a couple of steps. The detours gave me the unexpected perception that certain features of the land were the trail, when they were actually smooth, flat, winding channels where water had run. Several times, I nearly followed one, then realized I was heading off into unmarked areas. 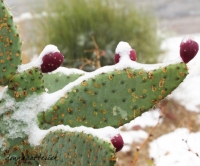 The second lap was faster with more snowmelt and fewer detours. Footprints became sun-warmed hollows of open sand. On the third lap, I only had to go through one stretch of snow with no way around it. The same only different.

And this, of course, is a metaphor for the craft of writing.

Images of Turtleback Mountain and of cactus in snow are by

Donna Catterick, whose photography is on the covers of Death Omen and Shadow Family, books six and seven in the Mae Martin Psychic Mystery Series.

Obeying her mother’s warning, Mae Martin-Ridley has spent years hiding her gift of “the sight.” When concern for a missing hunter compels her to use it again, her peaceful life in a small Southern town begins to fall apart. New friends push her to explore her unusual talents, but as she does, she discovers the shadow side of her visions— access to secrets she could regret uncovering.

Gift or curse? When an extraordinary ability intrudes on an ordinary life, nothing can be the same again.

No murder, just mystery. Every life hides a secret, and love is the deepest mystery of all.