I don’t know how you feel about reading mystery series but I love reading and writing them. Following a character on their journey through life, murders, and mayhem is fun. They have personal triumphs and failures, that the reader who has become a part of that character’s world can cheer and cry over.

Some of my favorite characters and series to read over the years have been Mrs. Polifax by Dorothy Gilman, Tony Hillerman’s Navajo Mysteries with Joe Leaphorn,  Leighann Dobbs, Blackmore Sisters, Marilyn Meredith’s Tempe Crabtree and J.L. Simpsons’s Daisy Dunlop. I enjoy meeting back up with them in each book and seeing what mayhem they get into.

The murdered person and the murder suspects are usually new characters, which means I have to discover all I can about them before I start writing the books. But that is one of the best parts about a mystery, discovering how to make characters connect and have motives for the murder that happened.

I’ve never thought of myself as analytical or a puzzle solver but I love piecing the story together to have my sleuths think it’s one person only to discover it could be someone else. Keeping my sleuths guessing, I hope also keeps  the readers guessing.

I just released the fourth book on my Shandra Higheagle mystery series- Murderous Secrets. This book has Shandra delving into her father’s death. She’d always been told it was a rodeo accident, but as her grandmother continues to come to her in dreams, she begins to feel it wasn’t an accident and searches for the truth.

A bonus about this book, the timing couldn’t have been better, because it happens in December and ends on Christmas Eve. 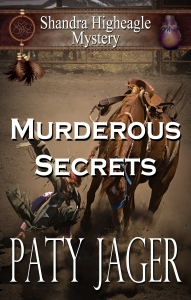 The accident that took her father’s life has always haunted Shandra Higheagle. When her dreams become too real, she knows it’s time to discover the truth. It doesn’t take long to suspect her father had been murdered and that someone is unhappy with her probing.

Detective Ryan Greer knows Shandra well enough to insist he be kept informed of her investigation into the decades old death of her father. When signs implicate her mother, he can’t withhold the information, even though he realizes it could complicate their relationship.

Award-winning author Paty Jager and her husband raise alfalfa hay in rural eastern Oregon. On her road to publication she wrote freelance articles for two local newspapers and enjoyed her job with the County Extension service as a 4-H Program Assistant. Raising hay and cattle, riding horses, and battling rattlesnakes, she not only writes the western lifestyle, she lives it.

All her work has Western or Native American elements in them along with hints of humor and engaging characters. Her penchant for research takes her on side trips that eventually turn into yet another story.

You can learn more about Paty at

her blog; Writing into the Sunset