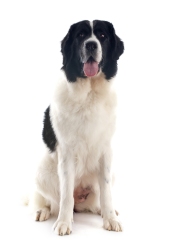 I’m sure you’ve heard actors say not to work with children and animals, you’ll get upstaged every time.

That’s what happened when I decided to make a secondary character from the Shandra Higheagle Mystery series a main player in the Christmas mystery, Yuletide Slaying.

I was excited when I came up with the idea to make Shandra Higheagle’s big mutt the character that finds the body in the Christmas mystery. I and many of my fans have fallen in love with the big, goofy Newfoundland/ Border Collie cross dog. She’s as quirky as a dog can get. With her large size she should be a great guard dog, but alas, her Border Collie timidness keeps her from being ferocious. Instead, she rolls onto her back in a submissive gesture when meeting people. She’s scared of loud noises, and prefers to hide behind Shandra than take on any confrontation.

Knowing all this about her dog, it’s a bit disconcerting for Shandra when Sheba bolts out of the parade line after a vintage car backfires and drags a sleigh filled with presents for foster children down a side street and disappears. Not only does she fear for her dog, she is worried what Detective Ryan Greer’s mother will think when the sleigh doesn’t arrive at the Christmas carnival.

To Shandra’s relief, Sheba steps out of an alley with the sleigh in tow. But there is a dead man in the sleigh. And she soon discovers, Sheba witnessed the attack because she has a stab wound.

Will the killer be out to finish off the big goofy dog? Will Sheba run when she sees the killer or will her Newfoundland protection instincts kick in?

This was a fun book to write with the focus on the beginning and end on Sheba. She has become one of my favorite secondary characters in this series along with Crazy Lil and Maxwell Treat.

Have you read a mystery where an animal was an integral part o the story line? What was the animal and the book?

Right now you can pre-order Yuletide Slaying for a special price. $.99!

When Shandra Higheagle’s dog brings her a dead body in a sleigh full of presents, her world is turned upside down. The man is a John Doe and within twenty-four hours another body is found.

Detective Ryan Greer receives a call that has them both looking over their shoulders. A vengeful brother of a gang member who died in a gang war is out for Ryan’s blood. Shandra’s dreams and Ryan’s fellow officers may not be enough to keep them alive to share Christmas.

Paty Jager is an award-winning author of 25+ novels and over a dozen novellas and short stories of murder mystery, western historical romance, and action adventure. She has a RomCon Reader’s Choice Award, received the EPPIE Award, and a Paranormal Lorie Award. Her mystery, Double Duplicity, was a finalist in the Chanticleer Mayhem and Mystery Award and a runner-up in the RONE  Mystery Award.  This is what Mysteries Etc says about her Shandra Higheagle mystery series: “Mystery, romance, small town, and Native American heritage combine to make a compelling read.”