Sometimes You Have to Jump

I wouldn’t consider myself a bold person. I slow down at yellow lights. Occasionally at green ones. I look both ways, twice. So I startled myself when I decided the protagonist of my first mystery would be a Sunday School teacher.

This was not at all the safe choice.

Sunday School teachers are not generally considered exciting. In movies they are the ones with buttoned-up shirts. They’re no fun. They quote scripture and sing hymns. At best, they’re considered prudish, at worst fanatics. Why would you want to spend 300 pages with one?

I thought about that a lot. I also worried there would be people who would simply not want to go near a book with a Sunday School teacher as a protagonist. Would I be considered one of those raving people who launch themselves at you at street corners? (I like to sit and write in Bryant Park in Manhattan and quite often people come up and try to convert me to one thing or another.)

However, beyond the fact of being fairly stubborn and wanting to write about what I wanted to write, there were several compelling reasons why I thought a Sunday School teacher would make an interesting detective.

Sunday School teachers, and people of faith in general, see the world as organized by a set of rules. There is a reason why things happen. So when things go wrong, when people are murdered, when your neighbor shows up dead on your front lawn, it’s all the more disturbing. Not only does it upset the protagonist, it upsets the natural order of things. In this case, Maggie Dove is forced to confront what she believes. It raises the stakes.

So that was one reason.

Then there’s the fact that I have spent about 300 years teaching Sunday School. I know the ins and outs. I know that if you decide to cook pretzels with your students, for example, you may set off the alarm in the kitchen. which will require the entire church to evacuate during the minister’s sermon. I felt I could flesh the novel out with that sort of detail. It’s a world that I know, and a world that I love.

So, am I happy with my choice?

Absolutely! And for my next novel, my protagonist is going to be a vampire. (Not.) 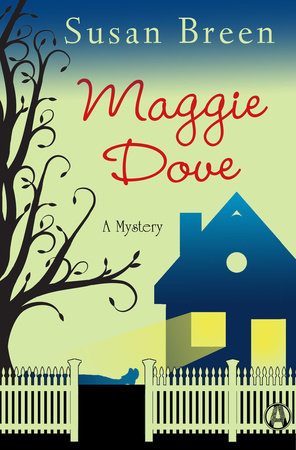 Susan Breen introduces a charming new series heroine in this poignant and absorbing cozy mystery with a bite. Maggie Dove thinks everyone in her small Westchester County community knows everyone else’s secrets. Then murder comes to town.

When Sunday School teacher Maggie Dove finds her hateful next-door neighbor Marcus Bender lying dead under her beloved oak tree—the one he demanded she cut down—she figures the man dropped dead of a mean heart. But Marcus was murdered, and the prime suspect is a young man Maggie loves like a son. Peter Nelson was the worst of Maggie’s Sunday School students; he was also her late daughter’s fiancé, and he’s been a devoted friend to Maggie in the years since her daughter’s death.

Maggie can’t lose Peter, too. So she sets out to find the real murderer. To do that, she must move past the grief that has immobilized her all these years. She must probe the hidden corners of her little village on the Hudson River. And, when another death strikes even closer to home, Maggie must find the courage to defend the people and the town she loves—even if it kills her.

Buy links:
http://www.penguinrandomhouse.com/books/538868/maggie-dove-by-susan-breen/
Bio:
Susan Breen’s first mystery, Maggie Dove, was just published by a digital imprint of Penguin Random House. The sequel, Maggie Dove’s Detective Agency, will be published on October. 18, 2016. Susan’s short stories and essays have been published by a number of magazines, among them Ellery Queen Mystery Magazine, American Literary Review and anderbo.com. Susan teaches creative writing at Gotham Writers in Manhattan. She’s also on the faculty of the New York Pitch Conference and New York Writers Workshop. She lives in a small village in the Hudson Valley with her husband, two dogs (cockapoos) and a cat. Her three grown children are flourishing elsewhere.
Social media links:
website: www.susanjbreen.com
twitter: https://twitter.com/SusanjBreen
facebook: https://www.facebook.com/susan.breen.16