Readers often ask me if I’ve ever lived in Florida, and when I say I haven’t, they ask,

logically, I suppose, “Then why are your mysteries set there?” But I’m afraid I don’t really know the answer. Because I’m a seat-of-the-pants writer who doesn’t outline and who lets the characters dictate the course of the story, Florida as a setting just kind of happened.

My friend of longest duration−−we met as babies−−lives in the area where A REASON TO KILL is set, and I’ve visited her often over the years. On my trips we went to the usual tourist sites, and I found attractions that found their way into my imagination and then into my books.

My original idea for the story centered around the houses of refuge built by the U.S. government in the late nineteenth century.  The barrier islands along the Florida coast were the scene of many shipwrecks from the years when the Spaniards sailed ships back to Europe loaded with treasure until today. These islands had no fresh water, no food, no inhabitants, and until recently, no means of communication with the outside world. Surviving a shipwreck didn’t mean the sailors would live. Stranded, they died of thirst and starvation before they could be rescued.

Starting in 1876, the U.S. government built ten houses of refuge along the barrier islands to provide shelter, food and water to men shipwrecked and stranded on these islands until they could be rescued. The Gilbert’s Bar House of Refuge is the last remaining one, and my first idea for a novel was centered on the wife of a keeper of the house, a lonely woman isolated with her husband, who falls in love with a shipwrecked sailor.

That idea didn’t make it past a few draft chapters, but still I liked the house of refuge setting. Mara, my alcoholic character and the one suspected of murder in A REASON TO KILL, was my original protagonist, and she was closely tied to the Gilbert’s Bar House of Refuge. But I felt more comfortable with a police detective who had the authority to ask questions and demand answers rather than an amateur sleuth, so I created Andi Battaglia, the detective in the Burgess Beach Police Department. I kept Mara and her problem with alcohol in the story, but she became a more minor character. Thus are settings and stories born.

Besides the houses of refuge, I also was interested in the groups who observed and protected the endangered loggerhead turtles as they came ashore along the coast to lay their eggs. This became the setting for the poisoning of Max Denman in A REASON TO KILL.

Once I set the first book in Burgess Beach, my pseudonym for the real town of Jensen Beach, when I wrote  the second book, SO MANY REASONS TO DIE, of course it was also set in Florida. This time my range expanded south to Miami and South Beach and north to Fort Pierce. The area, by the way, was christened the Treasure Coast because of the 1961 discovery of treasure from, among other shipwrecks, the 1715 Spanish Treasure Fleet, lost in a hurricane near the Sebastian Inlet.

Perhaps Andi and Greg will leave Burgess Beach in the third book—now in progress—but I can’t tell you that yet because I’m only the writer. It’s up to the characters to decide.

A REASON TO KI 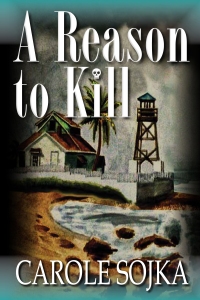 LL is the first in the series. When nine strangers convene on a Florida beach to observe and protect the endangered loggerhead turtles nesting there, one dies of poison and another turns up dead soon after.  It’s up to Andi Battaglia, a rookie detective in the Burgess Beach Police Department, to find out who among the remaining wildlife supporters has a reason to kill.

When in SO MANY REASONS TO DIE, Andi’s police partner, Greg Lamont, walks onto the murder scene of his ex-lover, he and Andi find themselves tangling with dangerous drug dealers amid the sizzling nightclubs of Miami’s South Beach.

See you all next month.